On Monday, we returned from our vacation to Japan. On Thursday we went back to work, which wasn’t easy…
During our trip, I kept an eye out for pin badges of the places we’ve been to, as a souvenir. I got quite a haul this time! 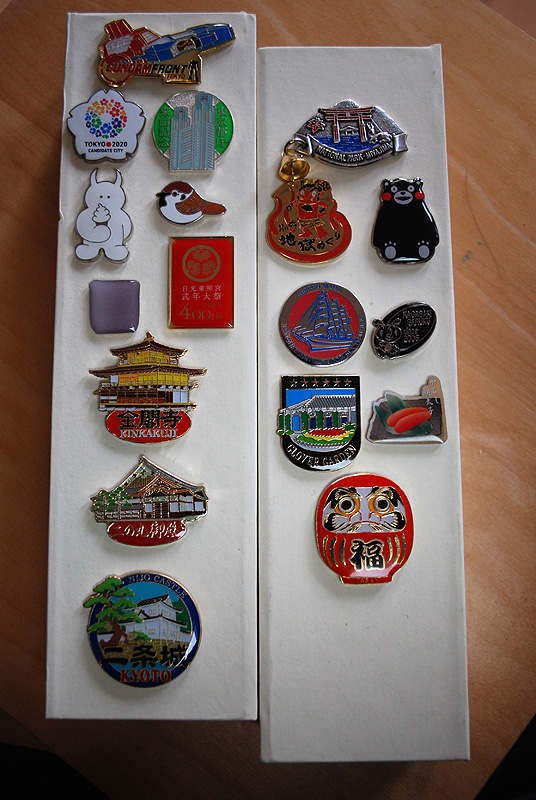 Top left is a pin I got from a gashapon-machine outside the trailer-shop of Gundam Front Tokyo, just behind the ‘life-sized’ Gundam model at Diver City Odaiba in Tokyo. I got only one, and I got the rare pin: a gold-foil version of a design of some sort of transport platform. Below is the text ‘Gundam Front Tokyo’.
Left below that is a pin to show support for the candidacy of Tokyo for the 2020 Summer Olympics. I bought this on top of the Metropolitan Government Office. There’s another pin like this, but it’s rectangular — I saw lots of civil servants wearing that type, it didn’t seem to be for sale.
Next to that is a pin of the Metropolitan Government Office, with it’s cathedral-like two towers. I got this from a gashapon-machine on one of the observation decks on top of that building.
Under the Tokyo 2020 pin is a pin of the mascot of Studio Uamou, eating an icecream. I bought it from the designer herself.
Next to that is a pin of a sparrow, made by the Japanese bird protection society which I bought in Shinjuku Gyoen.
Under the Uamou pin is a pin I bought in the Lee Ufan museum on Naoshima, depicting one of the shaded forms painted on the walls of the meditation room in the museum. There were different colors available, but I chose the grey, just like it is on the walls. (Also: most expensive pin ever: 1000 yen!)
Next to that is a pin celebrating 400 years of the Tokugawa shrine in Nikko (deservedly a World Heritage site) in 2015. The ‘mon’ on the pin are the three hollyhock leaves of the Tokugawa clan.
Underneath that is a large pin of Kinkakuji, the Golden Pavillion in Kyoto.
The two pins underneath depict Nijo Castle, the shogun’s castle in Kyoto.

I will need to make a new box to keep these pins in, as well!