Neuromancer was published in 1984. This was 2 years after the introduction of the Intel 80286 — so PCs were still in their infancy and so-called “home computers” were all the rage in homes everywhere. I think I got my first MSX computer then. The internet existed, but it was all text and all run on mainframes. Getting on the internet meant sitting in front of a terminal (or a PC that ran terminal software) and typing up commands. These mainframes ran VMS or a Unix variant, so you had to use arcane commands like “ls” instead of “dir”. Most terminals were monochrome and had a green phosphorous coating on the cathode tube — so all text was bright green. Applications that you interact with through this type of terminal are called “greenscreen” — sometimes lovingly, sometimes derisive.
The first time I connected to the internet, which was much later, in 1991 — it was on an Adm3/a connecting to the server at 9600 baud.
Actual computer work was done on the same mainframes. Four years later, in 1988, IBM released the AS/400 “midrange computer” — still a computer that required it’s own room, but less bulky than the mainframes that were used for really large calculations. The AS/400 became the workhorse of mid-sized companies for their administrative duties. It still is: we have lots of customers that are running insurance or policy systems on these machines. (I’ve also heard a rumour about Colombian drug lords kidnapping AS/400 systems programmers to force them to build applications to keep track of their illegal empire.) And here, too, greenscreen rules supreme — often as terminal emulators run on PCs, but even there the text is green. There are some systems to “convert” greenscreen applications to web applications, but that’s more like coating it with a little web sauce instead of actually converting.

So in the 80’s and 90’s, greenscreen ruled supreme — in the office, and on the internet. And this is the hacking that is portrayed in Gibson’s Sprawl trilogy (though I don’t think there’s ever mention of a greenscreen anywhere). It really meshes well with the idea of giant, faceless systems that control everything and everybody. I think this is why (classic) cyberpunk has a greenscreen esthetic: that was what that looked like at the time of cyberpunk’s inception. (Though I wonder if Gibson really knew about these things. There’s a legend that when he and Sterling were co-writing The Difference Engine, it was suggested they use e-mail to exchange the written text. The both of them found it too hard to understand, so they used hardcopy and used Fedex to send the manuscripts to and fro.)
And this esthetic has stayed with cyberpunk. Look at the opening scene of The Matrix: even the WB and Village Roadshow logo are greenscreen.

I’m participating in an online campaign of The Sprawl, called “Ashes to Ashes, Chrome to Rust” (which is streamed live through Twitch.tv — you can read my session reports and watch the videos linked from here). During the initial discussions we had about the ‘feel’ for the game we were going for, we decided to do ‘classic Gibsonian’ cyberpunk, reaching back to the rules and types of things that happen in Neuromancer.
We use Roll20 for our character sheets, and the sheets that are available for The Sprawl are fantastic. They’re even animated, and really well suited for streaming: you can ‘present’ things on your character sheet as items in the chatbox. We ‘project’ that chatbox into the stream, so the viewers can keep track of which is what. And… they’re greenscreen, which personally I think is fantastic. Here’s the top of my character’s sheet: 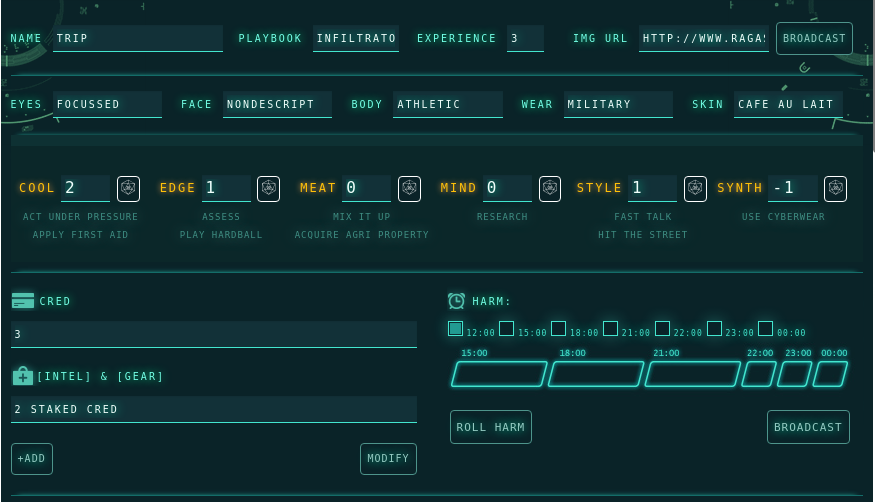 And one of the players, who is well-versed in design, created a really cool greenscreen-inspired layout, even with scanlines over our video feed. He also created a greenscreen GIF to promote the game on Twitter, and I really liked that.

So I set to programming and created a Python script that uses the curses library to recreate the greenscreen, 9600 baud experience to emulate a system in our game. Setting up a terminal in Ubuntu to look like greenscreen is easy, and byzanz can record (part of) the screen and create a GIF out of it. The text is actually read from a command file, so that it’s now possible to create GIFs like this without coding.