Saturday I went to my parents’, to help my father with his printer — or at least, to try again to get it to work with his laptop after a Windows 10 install.


It was fun to see my parents and have lunch with them and the like, but this whole thing was seriously un-fun! At least it’s resolved now.

Yesterday we went to visit klik’s mother, to help her with her printer. We advised her a cool double-sided printing colour laserprinter, because she sometimes has to do large print runs. However, it was very slow to print — we’re talking 12 hours for 20 pages!
She lives at the north side of the Veluwe, the most forested area of the Netherlands. It started all off with pines being planted to provide struts for the mines in Limburg, but after those were closed down, the forests remained. It’s now slowly transitioning from “production forests” to more natural forests, with more diversity. It is also the area with the most wild deer and boars.
What with the fall colours, it was beautiful driving through the forest lanes!

Here’s two crappy cellphone pics through the windscreen of a moving car to give you a little impression. 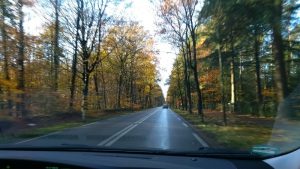 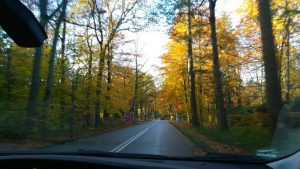 The printer issue was ultimately ‘solved’ by using a USB cable instead of printing over wifi. We also had a great dinner at the Greek restaurant in town.

When we drove back home, through the dark, we talked about what would happen if we were to hit a deer or a boar on the road. Surely the car would be a total loss! To alert drivers to the wildlife, wooden cut-outs of boar and deer have been placed next to the road — but since we drive over that road often, we’re not impressed by that. So when we saw a boar rooting through the mud next to the road, we almost assumed that it was one of those cutouts! It stayed clear of the road, though, so there was no harm done. First time I saw wildlife there!