The cooking store in town has the molecular cooking kits on stock, so we swung by yesterday to get an additional spaghetti kit: twice as many tubes means that producing the spaghetti is twice as fast! Turns out they had a sale, and the kits were 50% off. So we got two! (When we got home, we found out why: the kits had a best-by date of mid-2016… I guess they’re not the big moves in the store.)
I had also been thinking about the bland taste of the white chocolate spaghetti. Adding all that water just diluted the taste of the chocolate (which doesn’t have a strong taste to begin with) — so what would happen if we’d make spaghetti from something that’s a liquid itself? Then we wouldn’t have to add water as a ‘carrier’ for the agar-agar, and we wouldn’t be diluting the taste.

Hence: coffee spaghetti. I made a cup of really, really strong coffee, we added some sugar and a packet of agar-agar powder. With our tripled capacity, it took only three “runs” to use all of the liquid for spaghetti. 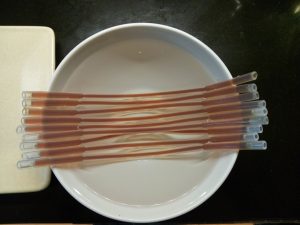 And with the second syringe we could work in parallel: one of us would pump air through the tubes to get the strands out of the tube, the other could then immediately fill that tube up again. 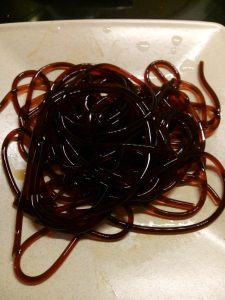 This is all of the coffee spaghetti that we made. We tasted a single strand, and it was really bitter (like strong coffee). So we needed something to go with it…

We also wanted to experiment with spherification. We had bought honey to make honey caviar. 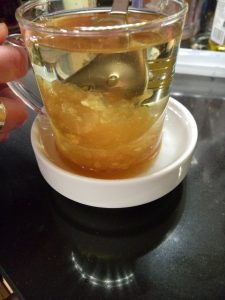 This is our honey-with-agar-agar at the bottom of a cup of cold vegetable oil. Next time, we need to let the liquid cool down before dripping it into the oil. The spheres were still so warm that they got stuck together. Not everything, but it was noticable. 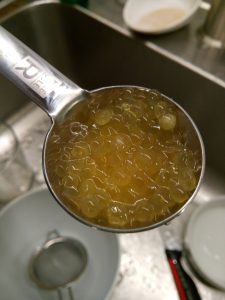 Spoon of honey caviar! We had to add some water to the honey, but it still had that delicious honey taste with no discernable dilution. 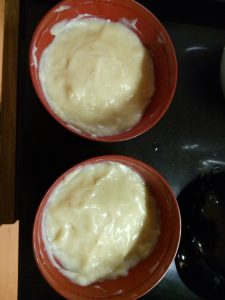 So we thought of a way to build up a dessert of four layers. This is the bottom layer: vanilla custard. 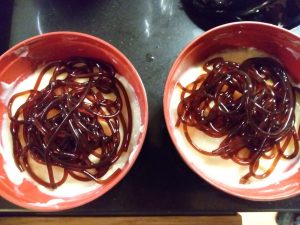 The bitter coffee spaghetti on top of that. 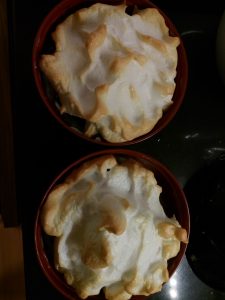 On top of that, baked whipped egg whites (that we had left from making the custard) with a little sugar. 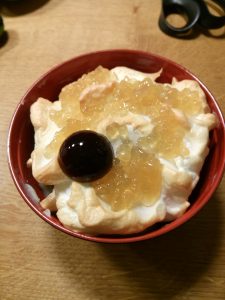 Honey caviar on top of that. The uneven surface of the baked eggwhites makes little ‘nooks’ that the caviar can collect in. 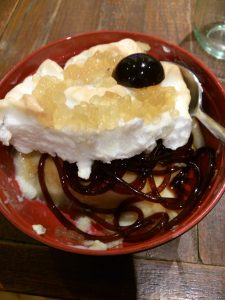 A cross-section of all the different flavours and textures. Next time, we’ll make the baked eggwhites proper merengues, so that they are crunchy instead of the marshmallow-like consistency they had, to add a more pronounced texture to the mix.

Interesting experiments, and I can see us using this as a ‘grand dessert’ in the future.