I’ve let the Dungeon World ‘campaign’ that we played with my university friends lapse, and it is now defunct, tossed and forgotten. We haven’t played with this group for more than a year now, I think. So when one of them sent out the call to play something together again, everyone was chomping at the bit. So yesterday, we went to visit him and we played Descent, a “board-RPG”. Everyone plays a character with their own attributes and class, and you get to choose a specialisation. So kitted out, you enter a scenario, consisting of a board layout (set with a grid for tactical movement), a ‘mission objective’ and several monsters that seek to keep you from fulfilling said objective.
Then there’s movement, attacking and special abilities, all the while keeping an eye on your fatigue and hitpoints, and of course you can combine your character’s abilities with those of your teammates to create spectacular chains of mayhem! Finishing a scenario yields XP, which you can use to get additional abilities. You can loot equipment caches and find gold, which you can use to buy equipment from a ‘store’ in between scenarios.
We had a lot of fun, and since the scenarios are linked into a campaign, it’s easy to just set up and go. So much fun to discuss who is going to do what, and how that would play into another character’s abilities. 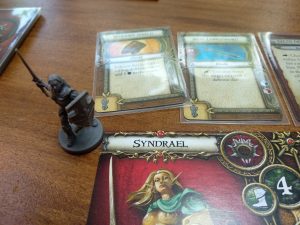 My character, with its miniature. She’s an Elven Fighter, and I chose the Knight specialisation for her. 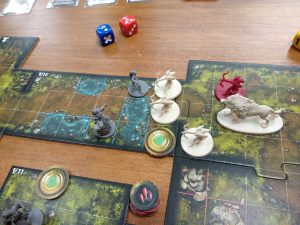 Our bard and our wizard tanking it up against a band of goblin archers. The wizard gives each monster within 3 squares a -1 on damage, and the bard stuns all the white monster miniatures (which are the ‘normal’ mobs) at the start of their turn, rendering them effectively incapable of attacking! We’ve made good use of these two abilities all throughout the game, sometimes to the frustration of the ‘overlord’, who manages the monsters! 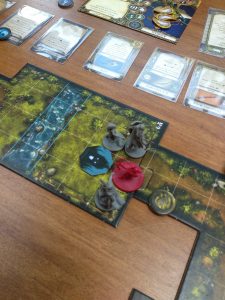 A goblin archer luitenant having a very bad day, surrounded by three heroes and our Shadow! 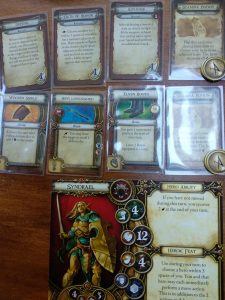 End state of my character at the end of three scenarios. We will pick up where we left off next time!

The system itself is a toned-down version of Fantasy Flight Game’s Genesys system, which they also use for their Star Wars tabletop RPGs, with successes/damage and advantages/surges separate and determined by the roll of different types of dice together. I don’t think it’s a coincidence that one of the first expansions for their generic Genesys core book was Realms of Terrinoth, a sourcebook for the world of Descent — it’s a nice up-ramp towards full-fledged pen-and-paper RPGs. But it’s also a lot of fun in its own right!