Some time ago, I realised that our large collection of beautiful Japanese washi papers would do us no good when it’s stored away.
So I devised a way to force myself to actually use those sheets by creating a cover around an A5 notepad, with the washi on the outside. I use it for taking notes and todo-lists, and if a page is filled, I take it out. That means that there is an end-of-life for this: once all the pages are gone, I’d chuck it and make a new one with a different paper on the cover! The transience is precisely the point.
I’m sure it’s symbolic that the notepad I used has run out of pages, and so last week I made a new cover for a fresh notepad. I look forward to taking it with me and make a fresh new start at my new position later this week. 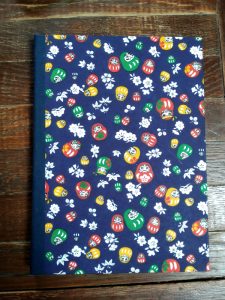 The paper depicts Daruma dolls. Daruma was one of the foundational fathers of zen buddhism, and a legend tells that he meditated for so long, that he turned blind and his arms and legs fell off from dis-use.
The Daruma doll has two empty eye sockets, and if you want to work hard towards a wish, you color in one of the eyes and place it somewhere it can see you work. Every time you see the doll, you are reminded of your goal and encouraged to work hard for it. Once you have achieved your goal, you fill in the remaining eye, to thank Daruma for his support.
All these dolls have their second eye filled in, which makes it double symbolic, because it’s certainly a goal I achieved in very short time! 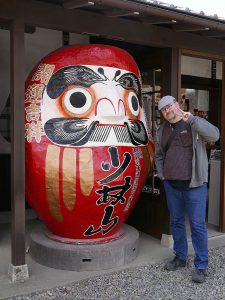 Last year in April, we visited the temple in Takasaki, Japan where the custom of the Daruma dolls originated. They have a little museum with all kinds of dolls and interesting variants — sadly you were not allowed to take photos inside. But the giant doll on the outside does provide the perfect photo op! 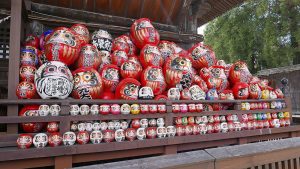 Next to the museum was a hall that was used for ceremonies, and there were nets around the veranda around it. To me, it looked like worshippers who had their wishes fulfilled would bring their doll to the temple and chuck it onto the veranda. I’m guessing the priests would burn the dolls (they’re often made of papier mache) once per year, just like the wooden prayer plaques at Shinto shrines.