The Judge Dredd comics are an interesting artefact of the 1980s: it’s what British comic writers thought how the US urban landscape would develop into a full-on distopia. I own the old, first-edition RPG books. The rules are uninspiring (as most rule-sets were in the late 80’s were) but there is a treasure trove of info on the world of Judge Dredd. And one of the things that exist in this distopia, where even coffee is forbidden, is “mock chicken”. 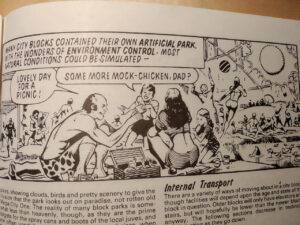 I know, what a horrible concept, right? What kind of messed-up future has ‘mock chicken’ instead of real chicken?

So when this video about vegan fried ‘chicken’ turned up on my YouTube feed, I was interested and we tried it out. We did use normal buttermilk instead of a vegan alternative, simply because klik drinks the stuff so we had a box of it in the fridge and so it was more convenient. We also used panko flakes instead of cornflakes (also based on the fact that we had that in our pantry) and substituted some of the herbs and spices in the batter. 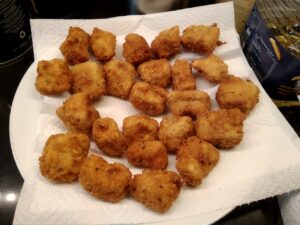 And it worked out pretty well! We made a big batch, enough for three times.

We ate it with Japanese curry. 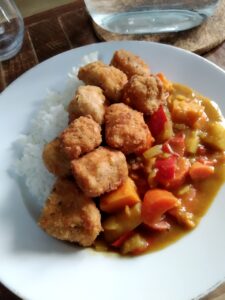 It’s a bit of work (especially the freeze-thaw cycle two times takes some time!) but the texture is really good. It needed a few more spices, but nothing that a dollop of tonkatsu sauce did not fix. 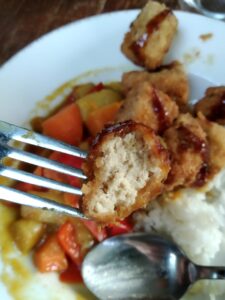 We since re-heated one batch in our airfryer, but the coating got a bit tough, so that needs a bit of experimentation to get right.