Today’s RPG-a-Day prompt is ‘Weapon’. I’m taking this as an opportunity to muse about the role of combat rules in RPGs. 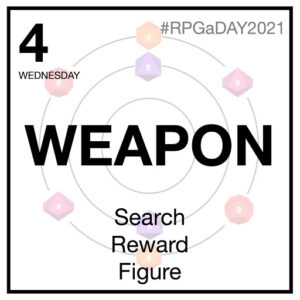 I am a firm believer that RPGs are about something — there is something the game wants you to do. Most RPGs have a ‘reward loop’ where certain things get you XP, and you can use those to make your character ‘better’. In D&D, you earn XP by defeating monsters using weapons, and when you level up, you get better at defeating monsters. So by any measure, D&D is about combat.
If you want something else than fantasy combat, then I think you’re better served by playing a game that is about the thing you want. If you want to play a teenage detective, you should play Bubblegumshoe instead. If you want to play magical animals in rural Japan, you should play Golden Sky Stories, etcetera. But D&D has so much brand recognition and the network effects surrounding it are so strong, that there is a large cohort of RPGers that refuse to play anything else. They insist that you can emulate every genre in D&D, because you can ‘just houserule’ it. (“Houseruling” meaning that a group agrees on using rules that are different from the ‘rules-as-written’.) But since D&D is not about other genres, you will get an experience that is inferior to using a game that is about the genre you want to play. D&D groups that proudly proclaim they didn’t roll the dice a single time in their sessions are playing a game that is about other things than combat, and by that reasoning would be better served by playing a game that has rules for the things they want to play.

Recently, I watched Secrets of Blackmoor, a documentary about the birth of Dungeons & Dragons, and mostly about the role that Dave Arneson played in inventing RPGs. It’s a bit of an uncritical view of what happened, but it does a great job of showing the progression from wargames to roleplaying games. I really recommend it if you’re at all interested in how new things get developed.
One of the things that struck me was that in the early games, the word of the gamemaster was absolute. There were very little rules, and the GM was encouraged to reason how a certain action would work out. The rules only served to cut any discussion about a decision by the GM. And anybody who has ever played ‘cops & robbers’ knows that the one thing that causes arguments is combat. “No, I shot you first!” and all that.
So what if the reason the rules of D&D are mostly about combat is because that is the most fraught activity in RPGs, and the GM should decide on any other situation? I think this is the aesthetic that many ‘Old School Renaissance’ games try to emulate. Taken to its logical extreme, you get the Amber Diceless RPG, where every decision is up to the GM and no dice ever get rolled. The ADRPG is near and dear to my heart, so why am I so resistant to the idea that you could do the same in D&D?

Could you indeed emulate any genre in D&D by going back to the idea of those first games and let the GM decide what happens?