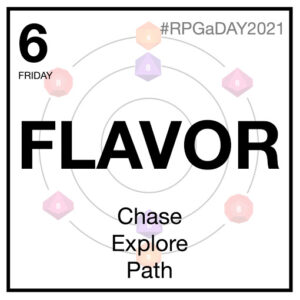 My friend Paulo reacted to my post on ‘Weapon’ and how you could potentially emulate any genre in D&D, under today’s keyword of ‘Flavour’. I will use the same keyword to respond, because I don’t think he’s completely right.

When I wrote ’emulate’, that was precisely what I meant, similar to how an emulator program allows a PC to act as if its a Playstation: the architectures are vastly different, but the PC can be programmed to act as if it is a Playstation. This generates a lot of overhead, but with the vast processing power available to us, you can get a very good approximation of the speed with which older machines ran. That’s also what I meant with D&D ’emulating’ a different genre or game: the conventions of the genre are ‘processed’ within the rules framework of D&D.
So could you emulate Vampire: the Requiem in D&D? I don’t see what not. The essence of V:tR is the humanity stat, because it models how vampires slowly become more and more monstrous as they move further away from their humanity. That thematic flavour is not contained in the rules for combat or the skill mechanics. So if you would add a humanity counter to D&D, and use the D&D mechanics for everything else, you would be emulating V:tR in D&D.
As another example: the Root RPG uses the Apocalypse World Engine, but the moves are all super bland, generic fantasy. One could argue that the essence of the Root setting is contained in the rules for how the different factions in the war react to your character. That is easily added to D&D: add that reaction track, and give a bonus on interactions with that faction, just like in the current rules. You’d use the generic D&D rules for the rest. Again, you would emulate the flavour of the Root RPG in D&D, without too much problems.
Blades in the Dark is another example: it is about a band of scoundrels trying to get by in a Victorian horror setting. The rules for combat and task resolution are, again, not essential to the BitD experience. That lies in the rules for stress and how the characters relieve that stress, and in the rules for building and extending a stronghold. Again, these rules can easily be added to D&D, and you can use D&D for the rest.

The last time this particular topic popped up, there was the predictable divide of people who were saying that they could emulate pretty much anything in D&D, and people who were increasingly exasperated telling them that they would be better served by playing another game that was about what they wanted to play. I am in the second camp, but not entirely. Someone pointed out that there is a subtle gatekeeping going on in the second camp, as if groups couldn’t add or change rules to their own D&D game to change the flavour into something they’re more interested in, and only the specially anointed high priests of RPG design are allowed to construct or change rulesets.
If you want to play a combat-focused game of Blades in the Dark, then you could absolutely do that in D&D by adding the stress rules. And if that is what you want to do, then nobody should tell you you’re wrong to do that. If you want to add the conventions of the genre of romance novels to D&D, then you can (and should!) do so, and play what you want. Could you do Ryuutama in D&D? Certainly, just add rules for travel. (There are, in fact, quite a few products that do exactly that.)
I care more about people playing things that interest them, than that I think they should play the “right” game.

Paulo raises an interesting point: what could you rip out of a game with it still being that game? I think that has an easy answer. Rather than get into some kind of ‘ship of Theseus’ territory, I think the ‘flavour’ of the game is the key to this question. As I stated before, games are about something. You can rip out everything in a game and replace it with something else, while it still being that game, except for the rules that give the game its flavour. You can’t rip out the combat rules of D&D without changing what the game is. You can’t play V:tR without the Humanity counter, etc.