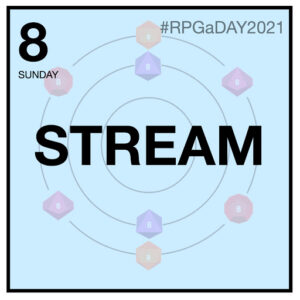 Playing RPGs as a form of public entertainment might be thought of as a new phenomenon. But in Japan, in the 80’s, there were ‘replays’ of sessions — basically a novelization of an RPG session. (As an aside, I think that also demonstrates the difference between narrative and story: an RPG produces a narrative, and that can be then edited down into an actual story — RPGs don’t produce stories themselves.) One of such attracted a huge following, and even got its own anime series! And still, replays are a big part of RPG ‘media’ in Japan.
But with advances in recording technology and the equipment getting cheaper, recording stuff became democratized — and with it the ability to directly record your RPG sessions — called “actual plays”, to distinguish them from replays. Professionally produced ‘APs’ like Critical Role are super popular — Critical Role is arguably bigger than D&D itself. I was part of two streamed campaigns myself, one with Dungeon World and one of The Sprawl. There were also a few sessions of D&D that were streamed a few months back.
Playing for an audience hits differently, though — it’s no coincidence that the players in Critical Role are professional performers. I’m not that funny when I don’t have time to think, so I don’t think I’d want to play in a streamed campaign again. I’m much more at ease when it’s just the group at the table.