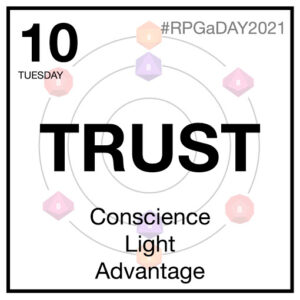 My theory, which I have posed in an previous entry, is that in the early days of RPGs, rule systems were only created for the things that routinely caused discussions at the table. That was also something that was mentioned in a few of the interviews in Secrets of Blackmoor, that there were people arguing over a decision of the game master. Of course, as a GM you could assert your authority over your game, but if you don’t have any players left because they don’t trust your judgement, then you’re not going to have any games going. Another way to deal with this is to codify in rules those things that give the most arguments. I think this is why old-school games have rules for combat but not much else — everything else was handled by the GM.
As more and more games became more and more abstracted, trust is once again very important. Especially in diceless games, where there is no resolution mechanic that allows you to ‘inspect’ the result, you must trust the GM to follow the rules. In the Amber Diceless RPG, you’re even not supposed to know your relative ranking, so you can’t even use that information to argue with the GM! It takes a certain maturity of both GM and players to build that kind of relationship of trust.
I’m looking to start a Nobilis game, and I’m happy that I have found four people who I trust, and who trust me in return.