A day late, but you’re still getting prompt number 12 for RPG-a-Day, which is ‘Think’. 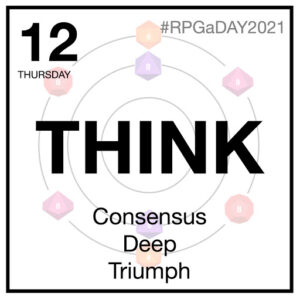 Nobody expects a player to act out all of their combat moves in a game — the character you’re playing is a trained professional (at least in most games), and most players are not. Combat is pretty abstracted: you roll your dice, add or subtract some numbers, and that determines whether you hit or not. But what about intelligence? Playing a character that’s not as smart as yourself is maybe not that difficult, but what about playing characters that are smarter?
Intelligence usually covers things like recall (do you remember something you learned?) and the ability to make deductions (can you deduce who is the culprit from all the clues you have?). (As an aside, I think Rolemaster is the only game that separated those two into two separate stats, Memory and Reasoning. Still, most knowledge skills used both of those stats.)
Recall is easy to abstract away. Your character knows much more about the world they live in that the player, because they have actual lived experience, while the player can only experience the world through the words of the GM — and many minutiae that are obvious to an inhabitant are unknown to the player. So you roll you dice, add your bonus and if you beat the target number (which expresses how obscure that piece of knowledge is in general), your character recalls the information.
Deduction is much harder to abstract away. Well, you could do the same as with recall, but is that really satisfying? Suppose there’s a murder mystery, and you collect clues. You roll the dice, and then your character solves the case. Is that fun?

One ‘solution’ would be to just not have a stat for intelligence, and stating in the rules that players can apply their full intelligence to any situation the characters are in. You can’t play characters that are smarter than yourself, but is that a really big loss?