Today’s prompt for RPG-a-Day is ‘Move’. 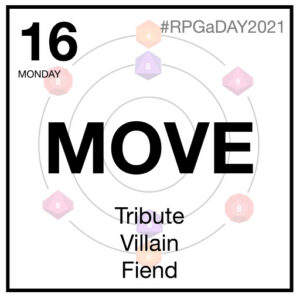 I’m going to riff off Paulo’s entry on ‘Move’ over on his blog where he compares boardgame moves with player agency in RPGs. I’ve been reading quite a few Japanese RPGs (currently I’m going through Floria) and there’s a trend in those games that is shaped by the RPG culture in Japan.
In Japan, it’s uncommon to invite people over to your home, and people lead busy lives. This means that most games of ‘table-talk RPGs’ are played in some kind of public/communal space. Long-form campaigns are rare, and most sessions are one-shots that are played with rotating GMs and players. Floria and Ryuutama have rules for making sure that your character has indeed ‘earned’ the XP that is on the sheet, etcetera — like the rules for D&D’s organised play programme, except not centrally managed.
In a long-form campaign, it’s not that bad if your character doesn’t get to shine this session, because their time will certainly come in the next. But in this ‘serial one-shot’ format, every character has to have their equal time in the spotlight. This means that the structure of the session is quite codified. For instance, in Floria, there’s an abstracted map of the forest you’re investigating, and characters take their Move in turns. During their turn, they can move a few spaces and undertake one of a list of possible actions, and then your turn is up and the next character goes.
This is also a lot like a boardgame, but to me it’s different from the way that Torchbearer was like a boardgame. I think that is because Torchbearer emphasizes the individual character, whereas Floria emphasizes the collective experience of everyone at the table. Torchbearer characters are encouraged to be unique and have beliefs and goals that might not align entirely with the rest of the group, whereas Floria basically tells you in the rules that you should make a character who is motivated to join today’s scenario and to coordinate your magic types with the other players because you really need all three in a party. In a ‘character collective’, it is much more palatable for me to take defined turns — maybe that’s a personal quirk and it’s just me?