Today’s prompt for RPG-a-Day is ‘Trap’. 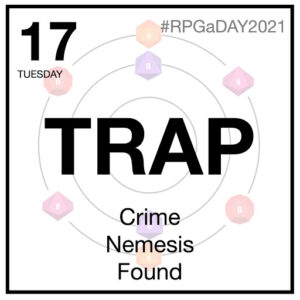 There was a time when GMs were supposed to be antagonistic against the players — the ol’ Gygax school of GMing. Many games were created to have people unlearn this and to heal the trauma of players. I have one such player in my campaign of The One Ring, and he was constantly over-analyzing and was very reluctant to act, in case there was an elaborate trap waiting to be sprung. Of course, my job as the GM is to make the characters have cool adventures, and that doesn’t really work if the characters die at every corner, right?
Anyway, back to the “good ol’ days”. Of course, traps are a great way to punish players who are not constantly paranoid. There is a notorious series called Grimtooth’s Traps that detailed all kinds of diabolical contraptions to let your PCs meet a gruesome demise. And I always thought these are all kind of boring. Is it fun to have the characters advance super-slowly through the dungeon because they want to exhaustively check for traps at every point of the way? Because that’s what you’re training them to do…
I did have some traps in The Secret of Cedar Peak, but these were mostly meant to restrict the PCs movement and to delay them, so that the cultists would have time to get their defenses in order. And if you saw through them once, you could pretty much detect them further down the line, so it did not slow down play. That’s what I think the best traps are: alarm devices so that any residents can get their response prepared. There is a cost to falling for them, but it’s not immediately fatal.