Today’s prompt for RPG-a-Day is ‘Subtitute’. 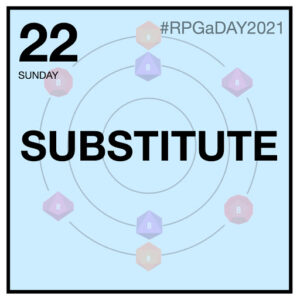 The most obvious alternative for a table-top RPG are computer RPGs. Those are convenient because they’re single-user experiences, and you don’t have to contend with scheduling issues (which are the bane of any RPG campaign). Just boot up the game and off you go! But of course the only types of experiences you can get in a CRPG are the ones that are pre-programmed.
When Skyrim was launched, much was made of its ‘Radiant Quest System’, which would generate quests ‘on the fly’. That ensured that there was always something to do — even after you’ve finished the game. But all that amounted to was a Jarl giving you a quest to go somewhere and kill something. Even though that might be a good approximation of how D&D quests work, it’s not that interesting in the long run.
What’s interesting about Skyrim as a role-playing experience is that you can inject quite a lot of character to, eh, your character — but the game does not really support that. You can decide as to what your character wants to do and who they are, and stick to that side of things. If you fancy your character a wizard, you can do the quests of the college of magic, and not do the thieves’ guild and assassin’s questlines. The game doesn’t care, it will happily let you do all of the questlines (and it’s pretty amazing at how you can finish all of the wizard’s college quests with only a sword and still become the grand magus…), but if you care about who your character is supposed to be, you can totally seek out the things that support that. When the Hearthstone expansion came out, and you could build a home, decorate it how you wanted, get married and adopt kids, the roleplaying aspect became even more important.
It was (is?) really fascinating how people poured so many characterization into a game that didn’t really have mechanics to support that. If you go that way, any ‘open world’ CRPG can be a good substitute for an RPG. (I’m sure there’s a parallel with how D&D doesn’t have rules for deep characterization and yet people go really deep with their characters in that game.)