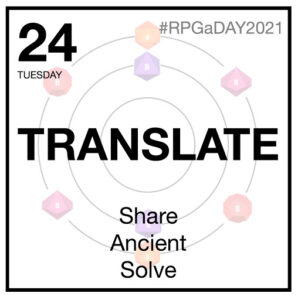 Most RPGs are American, derived from American RPGs or commentary on American RPGs. That might not be surprising, when seen from a historical and cultural perspective. But there are many different cultures out there, and some of them have a rich RPG tradition too. Of course, with those RPGs aimed at their ‘home market’, they are in their ‘native language’, which makes it hard for people outside of that ‘home market’ to enjoy the game, which is a shame. Luckily, translations allow more people to enjoy these games.
I have written before how the unique RPG culture in Japan shapes its games, something you can see in games like Ryuutama, Floria and Golden Sky Stories. (I am still salty that in 2003, the Adventure Planning Service announced an English translation of their RPG ‘Meikyuu Kingdom’, which I was/am interested in, and that never materializing.)
But there are other groups that break out of the US-centric mold. There is a thriving community of South-East Asian RPG authors that reclaim their culture and re-imagine RPGs through an anti-colonial lens. There’s a large Swedish group of RPG authors (including of course the Free League, but there are quite a few others — the hugely popular ‘deathmetal-inspired’ game Mörk Borg is Swedish too (as the title suggests).
And even in the US itself there are some groups making their own settings and whole RPGs because they don’t feel at home in the traditional RPG spaces. Black creators banding together to build Afrofuturist settings, etcetera.

I think it’s really cool that various people and groups decide to built their own to fulfill their own needs, and I love that through the miracle of translations, we can experience the games and appreciate their perspectives.