Today’s prompt for RPG-a-Day is ‘Theory’. 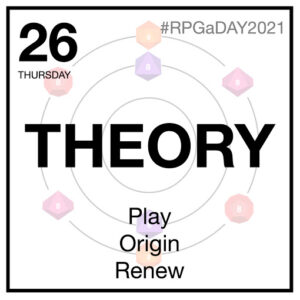 There is a lot of theory surrounding the design of RPGs. Most of the vocabulary used in the community was developed on a website called ‘The Forge’, and includes such gems as ‘gamist’, ‘narrativist’ and ‘simulationist’ — these being the three perceived axises of RPG design. Because RPGs are simultaneously a game, a tool for the creation of a narrative, and a simulation of a certain reality.
A gamist RPG is, first and foremost, a game to play, with rules to follow and a ‘win condition’. A narrativist RPG emphasizes the narrative produced, seeking to provide a certain ‘handcrafted’ experience. A simulationist RPG tries to simulate a non-existent world with
Different games place different emphasis on these three, and if you know your preferences, you can see which RPGs correspond to that. Arguably D&D is gamist, as it has careful manipulation of variables and a clear-defined ‘win condition’. King Arthur Pendragon can be said to be simulationist, at least in part, as it seeks to simulate what it would have been like to be a knight in King Arthur’s court — as well as providing rules for managing your fiefdom. And a game like the Amber DRPG is narrativist: with self-motivated characters that can affect the setting in dramatic ways, the RPG produces an intricate narrative and de-emphasizes game mechanics.
If I had to place myself in that space, I would say that I am leaning hard towards narrativist, with a bit of gamist on the side. I love mechanics that produce a certain feel or flavour.