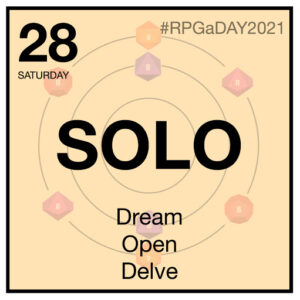 While playing an RPG is traditionally a group activity, sometimes you don’t have a group available. One time-tested option are the ‘choose your own adventure’ books, with the Fighting Fantasy series (kicked off 39 years ago with ‘The Warlock of Firetop Mountain’). There is a rudimentary game system for things like combat and general skill, and you hop from ‘chapter’ to ‘chapter’ based on choices and the outcomes of combat, skill or luck tests. (Incidentally, ‘Choose Your Own Adventure’ is a trademark, so such books are generally called ‘game books’.)
The series was written by the British writers Ian Livingstone and Steve Jackson. It was a public secret that a lot of different writers had ghostwritten the books — including the American game writer Steve Jackson (of Steve Jackson Games fame). Probably one of the very few times a book was ghostwritten under the writer’s own name!
The first six books were translated in Dutch a year after they were published, and I had ’em all — this must have been before I started playing RPGs ‘proper’. I lost books 1 and 4, but the others are still on my shelves. There’s also an interesting trend that any series of gamebooks will get turned into a full RPG too — there is a Fighting Fantasy RPG, as well as for a few other series.

Then there are the ‘solo journalling’ games that let you produce a diary of sorts of a character in a particular situation. Prompts give you material and things like card decks give you randomness. It’s not my thing, but there’s a ton out on marketplaces like itch.

Another option is to use a ‘game-master emulator’, either a stand-alone engine or an ‘oracle’ option if that’s built into the game. Most of these work in that the players ask ‘questions’ (“Does the baron know we’re coming?”) and some random factor gives you an answer. I’ve used one of them, the Mythic Game-Master Emulator, in a group RPG session. It was interesting, but a lot depends on the input from the players. I did like that there was a ‘chaos factor’ that meant that at higher chaos/entropy, answers tended to trend to ‘yes’, giving more wild results. It was interesting, but ultimately not something I see myself using again.