The Netherlands has been slowly closing again, after everything was opened too early and, predictably, cases rose again. The complete mismanagement of the pandemic by the Dutch government is breathtaking, in a bad way. But that’s not what this entry is about — it is about what happened as a result. With restaurants now closed in the week leading up to Christmas, it’s a heavy hit for a sector that has already had more than its fair share of problems these past two years. Some restaurants had already prepared for an ‘at home Christmas menu’, and others were able to pivot towards that, so not all was lost.
Friday afternoon, we drove into the city center to collect a meal from Bistro Bar Ivory, the ‘younger cousin’ of the Ivory restaurant, which is one of the best restaurants in Nijmegen. We had gotten ‘at home’ meals from them before, and I’m on their mailing list, so we checked out the menu and decided to order — along with a ‘half wine arrangement’. 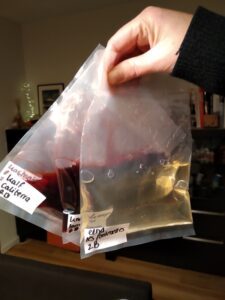 Getting the wine arrangement in sealed plastic bags is quite… something. We should have gotten straws to go with it, as some kind of adult capri sun… We cut a corner from the bags and poured into small wine glasses. It was good we had each half a glass per course. This was the first time in… months?… that we had alcohol, and it hit us hard! Delicious wines though, that went very well with the courses. 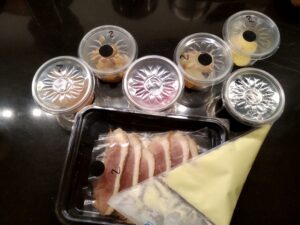 Each course was packaged as a DIY project, and there were clear descriptions on what to do to finish up the course and how to plate it. 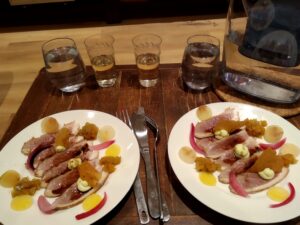 The first course was smoked duck breast filet with pumpkin, beets and apple 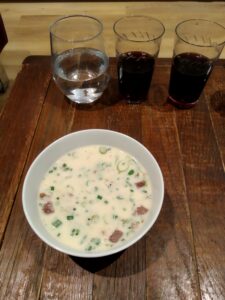 Then we had the garlic soup with small cubes of beef stew meat. It was not as garlic-y as I had expected, but it had just the right amount. 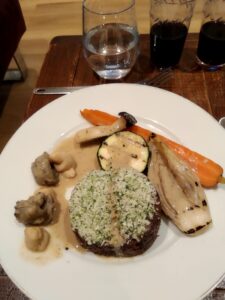 The main course was ‘veal cheek’. Super tender, with finely chopped hazelnuts and a great sauce. So good. 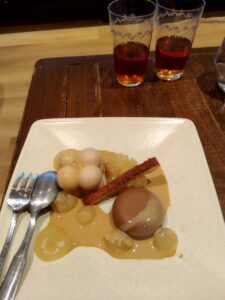 Dessert was various kinds of mousses, which we drowned in the caramel sauce that came with it.

On Christmas Day, we visited Klik’s mother (her sister was there too) and had dinner there.
But today we were at home, and we had ordered a meal box from Mr Smith, which was new to us. 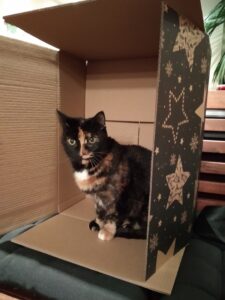 Collecting the meal went super-smooth, and it came in an attractive box. 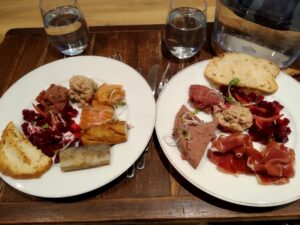 The starters were various small bits and pieces, which you could not choose. So we made sure to put most of the fish on Klik’s plate, and most of the meat things on mine. 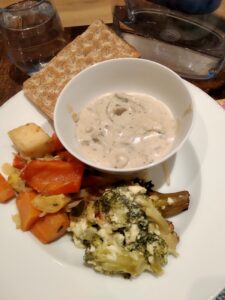 We divided the main course in two. This is a vegetable pie, stir-fried vegetables and mushroom ragout. Normally you’d serve ragout with some pastry thing or with rice, but this was just the ragout — so we added a piece of knackebrod. It was delicious, with lots of tasty mushrooms. 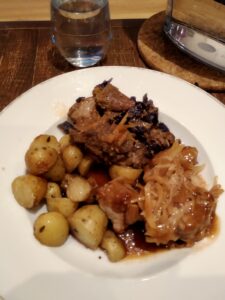 Second round of the main course were small potatoes with rosemary, game stew and wild boar. Not as ‘gamey’ as we had feared, it had a very well-rounded taste. 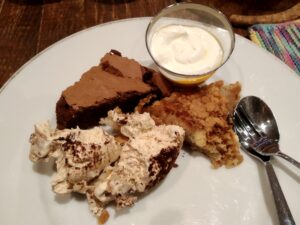 Dessert was a piece of brownie pie, apple crumble, tiramisu and some kind of mango yoghurt-cream. Can’t really go wrong with that.

We might look for something similar for New Year’s Eve, because we really enjoy having a restaurant dinner at home.