After our experiences with the Christmas dinners, we thought it would be fun to get some kind of culinary take-away for today as well. There is a local Facebook group that collects information about restaurants doing delivery or take-out, and I trawled through that in order to find something suitable. One poster advertised a ‘Tunisian box’ with all kinds of Tunisian dishes to nibble on, and that seemed like a fun thing to eat.
However, this person only had a presence on Facebook and Instagram, and ordering was done through a messenger app. They were not very responsive — my request to pay by bank in advance was read but not acted on.
So when it was time to collect the box, we didn’t know what to expect. The address we were given was also a normal house, not a restaurant or professional kitchen — so we theorized it was a hobby cook. And indeed, the whole operation was very… amateurish. I was the third in line, and a single stressed-out man was running back and forth to finish the last dishes and to assemble everything in the boxes. He said that he had been busy cooking since five in the morning, which I fully believe. I had to wait over 20 minutes for our box because of the lack of coordination and preparation. Good thing I had the money cash on hand, because I don’t think I could have paid by bank transfer like I wanted to, and nobody checked my name either.

But the food was very good — and there was a lot! 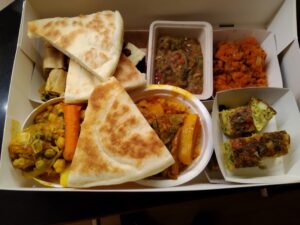 The box itself, with all the dishes. It was too much to eat in one go, so we divided it up in three ‘courses’. 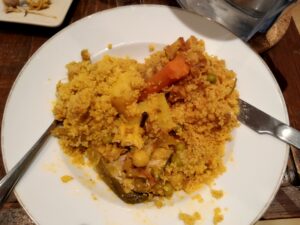 There were two types of couscous: one was a bit sweet with stewed beef, the other was a bit more spicy with chicken. We made our first course with these. 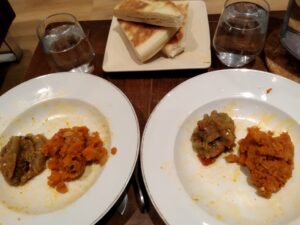 For our second course, we had the two vegetable stews with the incredibly fluffy bread. These were nicely spicy and went really well with the bread. 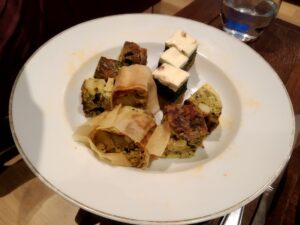 And finally the various tajines — which are usually stews, but in Tunisia apparently they are more like quiches? All were delicious too, and such variety.

Certainly very tasty, and it was more than enough for us two — we had gotten oliebollen, but we’re too full to eat any. But I’m not sure I’ll ever order from him again, because the apparent lack of planning doesn’t inspire me with confidence…