Next month will see the release of version 5.1.1 of our software. And it will see the generally available launch of our output management solution. We’re making good on that promise of eight years ago! That’s very exciting, but there is still an aura of mystery surrounding the idea of output management, as if it’s really difficult. But with our new version, it isn’t really.


As product manager, it is my task to introduce our new releases to our colleagues. And because this thing is completely new, I went all in: first an extended demo to introduce all the functionalities and to explain why you would use it, and then a second video that shows how to configure a freshly installed system to do the things I showed in the demo. All in all, it turned into just under 3,5 hours of video! 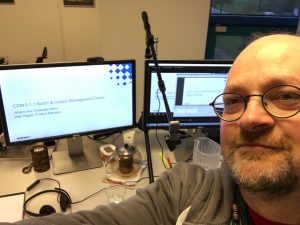 Me behind my desk, ready to start recording! I brought my own microphone, because it has so much better sound than the headset I have at the office, and I care about those things.

This week, I’m in Cambridge to attend a course for work. It’s a course given by a US company, and the only courses they do in Europe are in the UK. I had been lobbying for this course and had even pitched to my boss that we could get everyone in one place and do the course together — but then a restructuring happened and the company is getting sold (again), so that won’t be happening. But in the meantime, my boss did budget it for me and my German colleague to attend! The course is Tuesday, Wednesday and Thursday, so we could take Monday and Friday as travel days.
So now the question got to be: how do I get to Cambridge? Flying out to Gatwick was one option, but that was not very attractive: there are no flights from Weeze or Dusseldorf (the closest airports) to Gatwick. There is one from Eindhoven at a god-awfull hour, and one from Schiphol, which has the problem to even get there. When we went to London for a holiday, we went by train — so I checked how that would work out. It was certainly doable, which would mean I could travel from Nijmegen at a reasonable hour — but it was a bit more expensive. My boss travels by train when he visits the Nijmegen office (he’s based in Germany, near Stuttgart), so that helped to get it approved, I guess. And then I found that the upgrade to a first class ticket (‘Standard Premier’) was only 1,50 euros — so for 3 euros, I’m travelling first class! (There’s also the Business Premier, but that’s stupidly expensive.)
When you book a ticket for the Eurostar, which runs from Brussels to London, travel from any station in the Netherlands is included in the price. And since I had a first class ticket, I decided to sit in first class on the trip to Brussels as well. My ticket was checked twice, and the conductors seemed to agree with me, so that was certainly a win.

My boss, a Canadian who lives in Germany, is visiting Nijmegen this week. When I asked him if he needed me to make any arrangements (specifically for dinner), he replied that he’d just go to the snackbar for some fries. (This was through text chat, so I think the sad undertone I thought I heard was completely my imagination.) I replied that he should go to Restaurant Wally in the city centre, because they have great burgers there. I may have talked those burgers up quite a bit, and it turned out that he’s not averse to a good burger. It didn’t take long to decide that we’d go there together.
So when we were about to leave, there were two other colleagues left in the office, and they came along. One has a long list of strict dietary requirements, but since everything is made fresh, I thought it wouldn’t be too much of a problem to have them change the burgers slightly to conform to fit within the restrictions. They even have an allergy-matrix where you can see which allergen is in which menu-item. This colleague doesn’t like to make a fuss about her diet (which I can fully understand), but it wasn’t any problem for them to, for instance, leave the bun off the burger and to serve the dressing apart from the salad so that she could eat with confidence.
So expectations for the burgers were high, but they were met. We had a good evening, and it was around 9 o’clock when I dropped them off at their hotel. I think there will be more visits to Wally in the future when he’s in Nijmegen…

One of ‘my’ clients is based in Rotterdam — at the other end of the country. To make things worse, their office is in the city centre. Their parking space is so cramped that one of my colleagues had to leave his car through the boot one time. If I have to go there, I have to battle my way through highway traffic and city traffic. If there are no traffic jams (which hardly ever happens), it takes me 1:15 to get there. (The people are nice and the work is fine, though — I just don’t agree with their choice of office location. 😉

Today, I was scheduled to start with a new project for them. Yesterday I mailed my contact that I would be arriving ‘early’ and to ask him to arrange a parking spot for me. I didn’t hear anything from him, so I just assumed that everything was fine on his end.
Since klik has to leave at 18:30 on Thursday evenings to get to her classes on time, I got up at 06:00 so that I could leave at 06:30 — with some parts of the country being on holiday and it being early, I figured I could arrive somewhere between 07:45 and 08:00. That meant I could leave early as well, avoiding the worst of the evening rush hour, which would allow me to have dinner with klik before she would have to leave.

I had just turned off the highway to get into Rotterdam proper — in fact, I had just passed the city limits — when my phone rang. It was my contact, who had been taking the day off yesterday. He had three interesting things to tell me.
The first was that I could do the work for this new project at the office in Nijmegen. The second was that he did not have a parking spot for me, because he had assumed I would be in Nijmegen. The third was that he was still at home and would not be in on time to meet me.
It was then 07:45 — time enough for me to turn around and get to the office in Nijmegen by 09:00.

When I told this to the account manager, he told me my working day had started at 08:00 today, and that I could leave early, and to write a full working day on the client’s account. I got to go home even earlier than planned, which was very nice. So I was both pleased and annoyed, which is an interesting emotional state to have.

Still, it’s a bit of a bummer of the 216 kilometers I drove needlessly.

This afternoon, one of the directors visited our office (klik and I are in the same room (with others)) and told us that he wanted us to swap places with a team that had gotten bigger and needed more space in order to sit together. They were now dispersed over multiple rooms, and that was less than ideal. Us consultants work mostly independently or in small project teams, so it’s easier for us to spread out.
We had a choice of moving in the short term (today), the mid-long term (this weekend, but there’d be nobody else so that wasn’t really an option) or the long term (Monday)…

So we went for the short-term move. After about thirty minutes, we were swapped out with the members of the team that were present, and had claimed the best spots for ourselves.
Then we played the Heart Sutra (sung by these men from Zen.nl) to cleanse the air of evil spirits!

Today, I unexpectedly got a new pin in the mail!

Tomorrow, I’m visiting a client site to be on stand-by during a go-live of their new infrastructure platform for our product. In the past months, I’ve been re-installing their stuff on new server VMs and consolidating their platform — not very sexy, but the savings in hosting costs are tremendous, and the people are quite OK to work with.

Yesterday, the project manager mailed me: “We don’t expect any problems when going live. In fact, two months ago someone accidentally activated the new production environment. It happily chugged along in Production for a month before we noticed it.”

Today I went to a client that I did a lot of work for 2 years ago, but haven’t visited for quite some time — might even be six months since I last went there.
They have a security guy who does his job with flourish. I stepped into the door, he gave me a wide grin and called out: “Mr. Ragas! It’s been a while. Welcome home!”

That seriously made my day. A guy like that single-handedly changes your company culture for the better.

Resting up after a job well done and a cache found. Waiting for the other teams to find their coordinates…